(All Images Photographed by Brad Bates)

I began the day by trekking south off of Alternate Highway 17 in Cottageville SC via Jacksonboro Rd to Charleston Highway (aka Hwy 64), to about a mile shy of Jacksonboro, SC.

You see, I live in what is known as the Lowcountry of South Carolina, and we are known for three things: food, beautiful scenery, and history….LOTS of history. The Charleston area has been host to everything from the American Revolution, to the American Civil War, and beyond.

Every building, beach, field, and stream has a story.

And in the case of Charleston, a well documented story.

But some things, though documented, still manage to get lost along the road side of life and the road side of history. And several notable and historical American events are chronicled right here in this Podunk little community called Jacksonboro, SC.

How do I know? Because I take the back roads silly!

Oh, and I don’t let those little brown signs that say things like “Historical Marker 1/2 Mile” go by without me stopping to check out what it says. And more times than not, it leads me to something so spectacular, and so off the beaten path…that had I not stopped to check out that little road side marker, I might have driven right on by…and like so many others in America, let this little gold nugget of history get further lost by the wayside.

This cemetery (along with the now long gone accompanying church) was founded back in 1728 by the Reverend Archibald Stobo (what a name!). It was also known as Pon Pon Church. Later in the 19th century the church took up residence in the nearby town of Walterboro, SC. Sadly, the original building burned down in 1886.

I LOVE having history right in my back yard.

As I explored this cemetery I ran across this strange tree.

If only this was the strangest thing I would experience today. But alas, it was not. But…maybe…just maybe I was actually staring at the Upside Down like Will did in season two of Stranger Things! Nah…couldn’t be….

As you can see, this is a large oak tree that managed to wriggle it’s way right through the middle of a grave. Knowing how long it takes an oak to grow, and knowing how old this cemetery is…I would put the grave stone that has now become one with the tree at close to 200 years old.

Imagine what that’s going too look like in another 100 years!

May not even be able to see it. Creepy…if people only knew in a hundred years that there is a grave stone in the middle of that tree…what if my blog is the only blog in the world documenting this strange occurrence….hmm…I don’t even want to think about it.

Anyways, from there I made my way toward Walterboro along Hwy 64 for another 3/4’s of a mile to another little road side marker. This time it told me of a Revolutionary War battle called the Battle of Parker’s Ferry that took place near here on August 30, 1781.

As the story goes, 400 men led by General Francis Marion were sent to this location to intercept a raid by 540 Hessian’s, British, and Tories. General Marion totally caught them by surprise and the British suffered tremendous losses forcing them to withdraw back to Charles Town (aka Charleston). 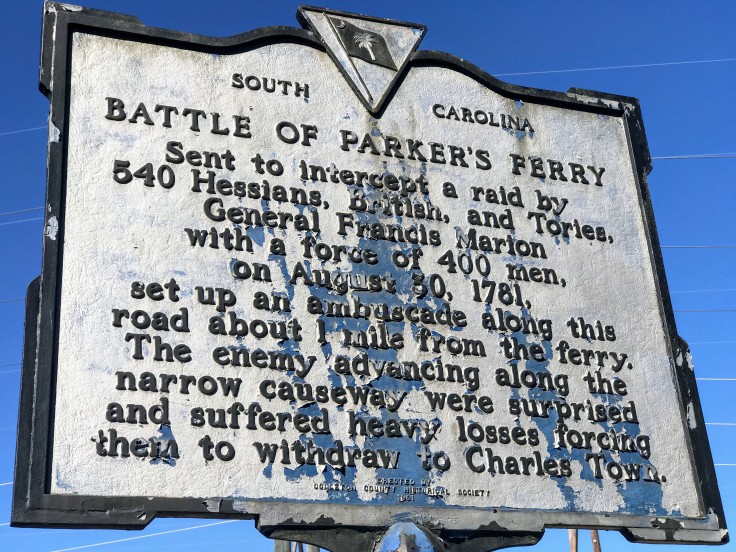 This roadside marker also happened to be right at the end of a very long dirt road.

I love dirt roads! One thing I always say is to never fear the dirt roads. Much like a rainbow, you are bound to find something interesting at the end of that road (or a horde of rednecks with banjos…if that’s what you come up on…do not get out of the car…turn around as quickly as you can…and don’t look back).

Fortunately for me, there was no banjo music waiting for me at the end, but instead I was greeted by the ruins of what was once known as the Pon Pon Chapel of Ease. Today it goes by the nickname “The Burnt Church”. 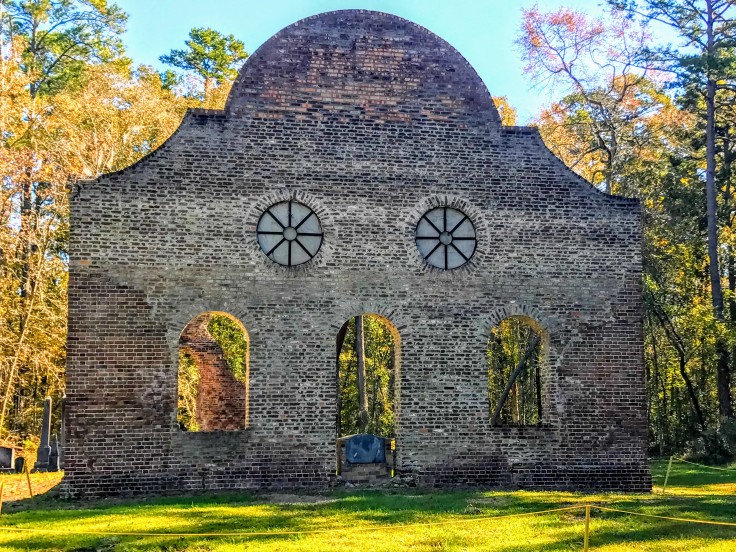 From the ruins I could tell this was once a beautiful structure. Sadly, as it’s nickname infers (The Burnt Church), it burned down in 1801.

But not before hosting prestigious John Wesley back in April of 1737.

If you don’t know who John Wesley is, check THIS out. Thanks Wikipedia!!

There was a pretty cool well on the backside of the property.

I think it was probably 10 feet deep, and there was definitely water in there, but thank goodness for this metal cage thingy over top of it…I might have fallen in! Or Timmy might have fallen in…and I certainly didn’t see a dog around trying to get Timmy help. So, this cage really was a life saver!! 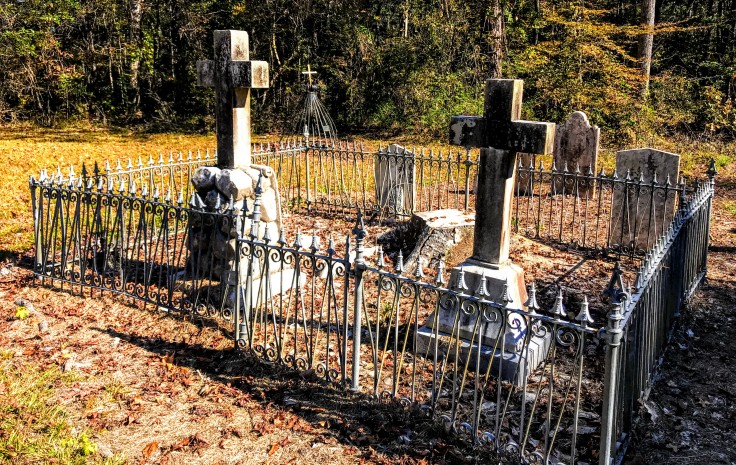 Now, if the grave stone trapped in a tree wasn’t strange enough, I was now being approached by a gentleman with a white beard and a hat. No, it wasn’t Gandalf…and no, I wasn’t being propositioned to be a burglar for a bunch of dwarves. If only I  could be so lucky.

No, instead, he called out to me while he was still some distance away and said, “Do you believe in ghosts or things of the supernatural?”

Hmmm…maybe this was Gandalf after all!

I responded, “I do believe in the spiritual and supernatural…now whether or not ghosts are a thing is certainly up for debate as I tend to lean toward the demonic.”

He said, “Good…I’m about to engage in something and had there been non-believers on this property it wouldn’t work. You see, I do what is known as grave dowsing.”

Oh boy…this is definitely not Gandalf. What have I gotten myself into??

He didn’t explain himself (thank the Lord for Google, see Grave Dowsing for more info). I guess he thought that I should know what this means.

We engaged in a little chatter about the fact that he was standing over his grandparents graves, and he needed to find out from his grandmothers grave where his grandfathers grave was.

Needless to say, I quietly retreated to the other side of the property to watch from a distance.

I could hear him speaking with the other gentlemen who was with him, who…just so happened to pull out a lawn chair and make himself comfortable under the tree next to the older man.

He asked it several times where his grandfather was laying and if the hard to read grave stone beside them was his grandfathers. The other gentlemen asked him what exactly he was waiting for. The man sighed and said, “You have to ask the right question if you want to get any kind of response.”

I continued walking around snapping pictures.

See…here’s me trying not to act interested in what Gandalf was doing at the grave of his grandmother…ya know…just standing in what I assumed would have been the spot that John Wesley stood to preach to the congregants here at the Pon Pon Chapel back in 1737.

Here’s some more graves. Notice…no one is talking to these graves.

Finally, I decided it was time to go. The older man was still under the tree with his metal rods in the air talking to the grave.

Yep…now is a good time to go.

BRW Ratings for this trip:

Tune in next week for Part 2 of my journey around Jacksonboro, SC.

ALSO, if you want to see more pictures from my travels, check out the GALLERY.

This site uses Akismet to reduce spam. Learn how your comment data is processed.